Today’s lesson will talk about some Barry Harris harmony hacks.

Do you want your melodies and chords to sound full and amazing? Do you want to grab your audience’s attention? Do you want to have fun exploring the chords of a genius level jazz pianist? Then, you’ve come to the right place.

We’ve got a ton of awesome stuff to talk about so go to your piano and let’s get started!

The Barry Harris harmonic method is one of the most unique ways of building chords there is in jazz piano.

Well, what exactly is that? How does Barry Harris think about it?

The Barry Harris harmony approach is a way of thinking about jazz chords and melodies based on specific 8-note scales.

Instead of using the usual 7-note scales, 8-note scales provide a way for you to discover new and exciting chord voicings. You can use these to unlock cool scale secrets that you can use to build any chord in any key.

In the next section, you will learn what is that magical scale that Barry Harris says everybody must know.

Next, play a B diminished 7th chord:

The C6 and B diminished 7th chords have an interesting relationship. They tend to resolve into each other nicely!

Now, let’s say we combine the two chords to form a scale. How would that look like?

Congratulations! You have discovered what Barry Harris calls a sixth diminished scale.

It’s a scale that combines major and diminished together. This forms an amazing amount of harmonic possibilities that you can use to make songs super rich.

This scale got Barry Harris very excited about new possibilities. I hope you’ll be excited as well since it will make you sound awesome.

Lets dig into this scale on an even deeper level now.

Sixth diminished scale appear in many styles of music. We even see it in the comprehensive lick breakdowns inside the Jazz Masters Method.

Playing little melodies from this scale creates really jazzy sounds.  In fact, you probably already know this scale by another name: the Major Bebop scale!

The sixth diminished scale and bebop scale can be used over any major chord. Check out this really awesome Major Bebop scale tutorial by Steve.

Now, that you understand the basics of the scale lets take it to the next level.

How to Explore the Sixth Diminished Scale

You start exploring the sixth diminished scale by simply playing it. Play the scale up, down, then play randomly. This is a similar manner to how you think of a Major Bebop scale.

By the way, if you haven’t explored chord tones yet, I also recommend you check out this lesson on chord tone soloing.

Now, it’s time for you to make it a lot more interesting!

Get into exploring harmonies in the sixth diminished scale by playing it in thirds just like this:

The only odd one in this sequence is that major 2nd between G and A. However, that is necessary if you want to strictly play the scale in thirds in the proper sequence.

Once you’ve gotten the hang of playing the sixth diminished scale in thirds, go ahead and harmonize it as chords in this sequence:

By playing the scale this way, you see how simplicity and sophistication can merge.

This concept of taking scales and turning them into chords is a skill that every serious piano player MUST master.

In fact, David Garfield has a whole system where he teaches how to turn scales into great sounding chord voicings in the Jazz Improvisation Super System.

As you can see in the chart above, each chord resolves nicely to the next one.

Sounds complicated? There is a simpler way of thinking about it.

When you harmonize the sixth diminished scale, you’re actually playing just two chords (a I6 and iidim7) and their inversions!

It so happens that they resolve nicely into each other!

Isn’t that just mind-blowing? It truly is!

How to Find Dominant Chords in a Diminished Chord

One of the most interesting things about harmonizing the sixth diminished scale is that you’ll discover a great number of dominant chords jazz piano chords in it.

Now, what does that mean for you?

If you can easily change keys, you get to make really interesting music that will just be astonishing for your audience!

Now, do you remember when you played that sequence of 6 and dim7 chords? Just take a look at one of those diminished chords:

However, that one diminished chord can yield four dominant 7th chords! 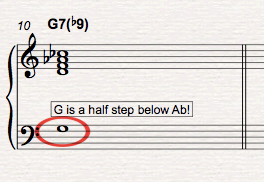 That left hand chord becomes the root note of your dominant 7th(b9) chord!

How to Change Keys with the Harmonized Sixth Diminished Scale

Because you get the same diminished 7th chord every time with your harmonized sixth diminished scale, you get to have four dominant chords.

In the example above, you played a Dm7(9) then a G7(b9) chord consisting of a G for the left hand bass and an Fdim7 for the right hand.

In this case, you would expect a Cmaj7 to come up in the next bar as shown above.

What if you use a root note other than G over that diminished 7th chord? Use Bb this time:

All of a sudden, you have a V chord that leads to the key of Eb!

Now try Db this time as your bass note over the Fdim7 chord. You can now go to the key of Gb:

What about using an E as the bass? This time you can now go to the key of A:

Again, to use this technique properly, use the notes a half step below the notes of your diminished chord as bass.

Remember how you played the sixth diminished chord in C and you found a C6 chord?

What if I tell you we can get four more dominant 7ths out of that with a few changes?

Here’s how to do it: You can voice lead effectively from a C6 chord to a C7(b9) chord by moving the A up to Bb and then add a Db before the E.

If you do this correctly, you should have a Gdim7 with your right hand.

As you have seen earlier, by simply changing the bass note, you can get four different dominant 7th chords out of that:

From those dominant 7th chords, you can effectively move from one key to another:

Being set free like this unlocks a great number of possibilities!

How To Best Practice Chords To Master Barry Harris Harmony

The best way to get a hang of the tips described earlier, it’s best to use what’s called a drop 2 chord voicing when going over the sixth diminished scale.

Drop 2 voicings are a great way to make your chords sound more open.

To understand how to form a drop 2 voicing, follow these steps:

1. Play any four-note chord in its first inversion. Use C6 for now so you’ll have EGAC: 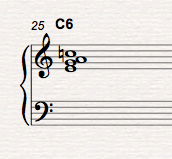 2. Drop the second highest note (A) an octave lower. For your C6 chord, you now should have AEGC

Now that you know how to play a drop 2 chord voicing, harmonize the C sixth diminished scale using drop 2 chords: 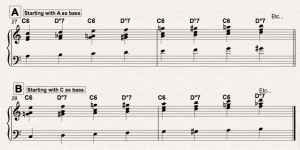 To get the most benefit out of this exercise, practice the sixth diminished scale in all 12 keys in drop 2 chords.

In this way, you’ll get a hang of how to harmonize and play chords just like Barry Harris.

Not only that, you now will be able to unlock various possibilities for playing music.

This doesn’t mean you can stop. Being complacent will be the death of your musical journey.

If you want to learn the most pro sounding jazz chords and tunes but feel frustrated and overwhelmed we’ve got you covered. 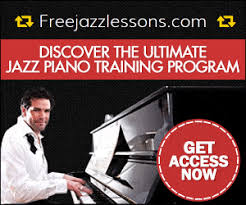 Whether those barriers be confidence, a lack of repertoire, or a dearth of musical ideas, Premium Membership will help you break through.

Premium Membership is a comprehensive program designed to solidify jazz fundamentals, arm you with great chord voicings, improvisation skills, and an awesome repertoire of tunes.

Learning from Premium Membership will prepare you for any jazz playing situation, get your audience up in their seats, and enable you to have more fun playing jazz piano.

I hope you enjoyed this lesson on how to play harmonies and chords like Barry Harris.

Were we able to help you? Did you find the lesson useful? Do you like the sound of the jazz diminished scale? Do let us know your thoughts by replying through the comment section below!

Until then, keep working on your wonderful music!

Mark Galang is one of our contributors at FreeJazzLessons.com. He loves teaching all styles of music especially jazz, blues, rock, classical, and Christian music.