Would you like to learn more about the augmented chord? Want to learn how to use this amazing chord to build some great sounding jazz improvisation lines? You’ve come to the right place.

In today’s video we’re going to explore augmented chord theory and a simple approach you can use to begin adding it’s rich sound into your improvisational bag of tricks. Lets get started!

Take 3 minutes and watch this video. Then scroll down to learn some insider tips for how to use the augmented chord today in your music.

Okay, so here’s a fast way to build an augmented chord. First start with just a basic major triad.

Lets use a basic G major chord like I used in the video above. The notes would be G – B- D.

The overall formula is this: Take any major chord and bring the fifth up a half step and you’ve built yourself an augmented chord.

If you’re a fan of scary movies or Halloween type stuff you’ll hear this chord being used quite a bit to create a sense of mystery.

Now that you understand the basics formula for an augmented triad you’re ready to start adding some notes the chord and expanding the harmonic possibilities.

2 “money notes” you can add on to these chords that sound great are the major 7th and the flat 7th.

If you add the major 7th on top of an augmented chord you’d call the new chord a major 7 #5 chord.

If you add the flat 7th on top of an augment chord you then call the full chord an augmented 7th chord or a dominant 7 b13 chord.

95% of the time in jazz if you’re using the augmented sound it will be used on the dominant 7th b13 chord.

In fact, my 2 hour Stella By Starlight course ( which you can access inside the Premium Jazz Membership System) features this exact chord in the beginner, intermediate, and advanced video tutorials.

This chord is a must know. That’s why it’s important that you also learn how to improvise over it. So, lets break that down now.

So, how do you use the augmented chord in your improvisation?

Well, one of the easiest and most direct ways of doing this is to use arpeggios notes from the chord over a dominant seventh chord.

For example, if you see a dominant chord in your jazz tunes you can play augmented chord arpeggios over that chord type.

Over the G7 chord you can just play G augmented arpeggio notes over that chord.

It works because the augmented chord needs to be resolved and every note will pull to the final chord here which is Cmin.

So it’s this great vehicle to use over dominants, because each individual note wants to resolve and as an overall chord structure… dominants also want to resolve.

Can you hear in the video when I play G7 and then add the augmented arpeggio notes on top how strongly it wants to pull back to Cmin?

Essentially when you use more advanced jazz theory concepts like this  it helps you tap into an important musical concept called tension and release.

Listeners love it when you skillfully use tension and excitement in your playing.

So, start experimenting with this augmented sound.

Where Else Can You Use The Augmented Chord?

There are lots of other chords that you can use this augmented sound on. You can use it on an #11 chords, minor major 7th chords, and lots of other amazing sounding advanced jazz harmonies.

There’s even an augmented scale as well. It’s one of those modern jazz scales that every musician needs to know.

So, I highly recommend that you start exploring that and all the most important jazz scales and chords. 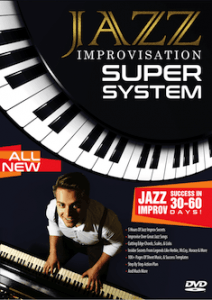 Now, if you want more of a step-by-step system to start exploring things like augmented scales and other more modern chords, we actually have a course that teaches you step-by-step how to get this stuff quickly in your playing.

David has played with some of the biggest names in jazz, people like George Benson, David Sanborn, Freddie Hubbard.

He’s a top LA studio musician, played on thousands of albums, so it’s really neat that you get an opportunity to learn step-by-step from a master like him, his whole jazz improvisation method.

Students of the Jazz Improvisation Super System are in great company.

“David Garfield is with out a doubt one of best keyboard players on the planet. If your serious about learning and want to take your playing to the next level, I highly recommend taking lessons from him. David definitely helped me to be a a better player.

To hear David Garfield play keyboards is to be inspired. To study or take lessons from him is to be smart. I learned so much from my lessons wth David.”

So I highly recommend you pick up this 1 of a kind course. It is a direct path to take your playing to the next level.

In the meantime, get into this beautiful chord sound and watch your playing go to the next level.

If you have any questions about the augmented chord or The Jazz Improvisation Super System 3 DVD set please leave a comment below. I read every comment and I’m happy to help.