Are you having problems playing jazz patterns, scales, or longer lines at fast tempos?

Is your improvisation grinding to a screeching halt when you play over complex chord progressions?

Don’t worry, you’re not alone! Today I’m going to try and fix that for you.

I’m going to teach you how to play some very effective and easy 4 note Coltrane jazz patterns that will help you solve this problem.

These patterns for jazz not only sound great, but they’re also easy to grab when tempos are fast and chord changes are complex.

You can use these patterns on any instrument too! So, lets get started learning by exploring these jazz patterns right now.

What Are Four Note Jazz Patterns?

Four note jazz patterns are harmonic devices that jazz players use to construct lines which make them a ‘must know’ for the practicing musician.

This article examines a common four note pattern which is sometimes referred to as the Coltrane Pattern or 1235 because it is constructed using the 1st, 2nd, 3rd, and 5th degrees of the scale as shown below.

The first 1235 grouping has no 7th which means it can be applied over both major and dominant 7th chords.

Four note groupings are typically amended for each chord type. For example the 3rd can be flattened to make them fit over minor 7th chords.

These short patterns helped him fluidly outline the rapidly moving harmony because they are not as ‘bulky’ as jazz scales and are easier to grab when chords are moving by quickly.

Because four note groupings only contain four notes, the soloing technique is effective in quaver rhythms (eighth notes) in progressions where there are two chords in a bar such as Rhythm Changes and Giant Steps.

But they work equally well in easier progressions like in this article too.

Here’s how each of the patterns for jazz look together on the stave and with tablature for guitarists.

Try running up and down each pattern a few times then record a one chord vamp and try creating some phrases using the patterns.

Work on one pattern at a time and when you start to become fluent with the patterns, apply them over tunes that you are working on.

An effective way to use the major four note grouping to play two sets of the pattern going up in fourths.

The following example shows how you can start a line using the pattern in fourths, starting with a 1235 in C, followed by a 1235 in F.

I have chosen to write this lick over a C7 because of the bluesy elements in the second bar but it could easily be applied over C major 7 too.

Here’s an example of what this lick sounds like:

To conclude this lesson I have enclosed a more advanced short etude of how these patterns can sound when you have practiced each one using techniques such as rhythmic displacement and chord substitution. 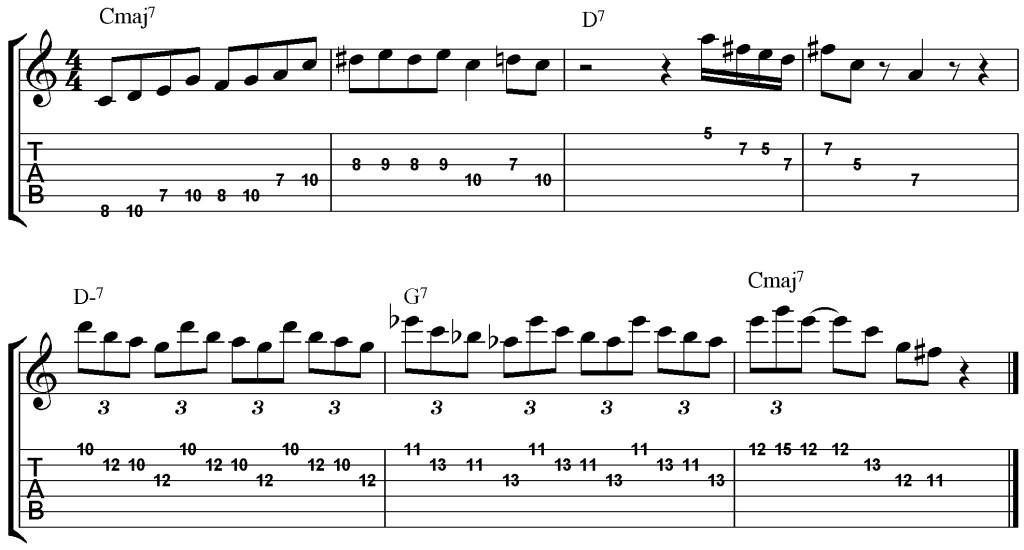 Here’s an example of what this etude sounds like:

You’ll find a lot of other great musicians using similar 4 note patterns in their playing too. People like Mccoy Tyner, Jerry Bergonzi, George Garzone, Brad Mehldau, Pat Metheny, and many other great players.

I hope that you have enjoyed playing and reading through this introductory lesson to four note groupings.

I recommend playing these patterns in all keys as well as in different locations on your instrument.

But most importantly to have fun with them in a musical setting such as jamming along to a backing track.

This beginner level jazz piano lesson on major scale for jazz and this lesson on minor scales for jazz also contain jam tracks you can practice these 4 note patterns with.  Enjoy!

This was a guest post written by Jamie Holroyd. Jamie Holroyd is a UK based educator, author and performer as well as the founder of  www.jamieholroydguitar.com, a free website with lessons to help students across the globe play jazz and blues guitar.

Each of the techniques used to amend the 1235 patterns are discussed in Jamie’s eBook Introduction to Jazz Guitar Improvisation.